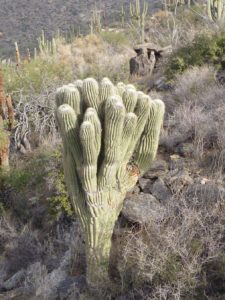 A monstrose Saguaro cactus in the Rincon Mountains east of Tucson

You’ll see biology mentioned a lot.  That’s because I’m an evolutionary biologist.  I’m Ross.  I live in Tucson, Arizona, USA.  I came here to get my Ph.D. in Entomology, studying a termite endemic to the Sonoran Desert.  Since then, I’ve built computer networks for various entities, but I’ve kept my hand in observing the natural world.  Lately, I’ve been hanging out again at my alma mater, the University of Arizona.  I’m also a reasonably accomplished endurance athlete, using feet most of my life, but adding bicycles as my feet let me down in midlife.  My first two “century” events, as the biker crowd labels 100 mile bike rides, were on foot, not bikes.  I’ve done a fair number of centuries and a bit further since I had to resort to bikes.  For many years, I was the co-administrator of the trail run series held in the mountains around Tucson.  My wife Pam is a doctor/photographer who helps me explore and figure things out.

In 2009, I became very interested in the hydrocarbon energy that powers our civilization; oil, gas, and coal.  Since 2012, I’ve become fascinated with human nutrition.  Believe it or not, they’re intimately related.  The cheap hydrocarbon energy has driven massive production of cheap commodity foods.  Producers and processors try to figure out how to tun all that into products they can sell without much regard as to whether those products are good for our health over time.  We’re now running short of the inexpensive hydrocarbons, despite the current low price of oil.  There’s another website for that– http://petroleocene.org.  A good way to get ready for hydrocarbon insufficiencies to come, which will cause economic and societal stress, is to be as healthy and adaptable as possible.  Turns out non-toxic nutrition is the most important contributor to that, something that surprised me a bit.

I like to claim that my diverse background in academics, technology, and athletics helps me evaluate the world a bit differently.  Truth be told, it’s probably the reverse.  Broad curiosity led to broad interests and a different perspective.  Well, you decide about the perspective.

This site is very much a work in progress.  I build out the basic concepts, then make more passes to add more sections, detail, and richness.  Keep checking; I promise to keep working on it for awhile.