Have you ever wondered what it’s like to move forward all day and all night?  While most runners, and non-runners for that matter, think of the marathon distance, 26.2 miles, as an ultimate test, it’s really just the longest sprint event for a carb-adapted runner.  As I say on my Endurance Training page, it’s a good test of how well you can run until your body runs low on something important.  If you’ve learned how to replace the water and electrolytes for a longer run, can you carry that forward, plus keep your energy levels up for extended periods? 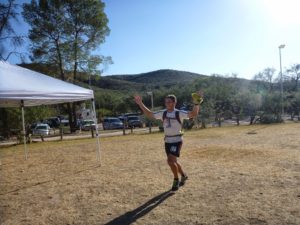 Click on this photo.   This is Kent, looking cheery as he completes a 50 mile race.   Like all successful ultramarathoners, Kent has mastered the balancing act of keeping his brain and body working, and staying reasonably comfortable, for indefinite periods.  Runners who’ve done hard runs up to the marathon distance, but haven’t learned ultramarathon techniques, tend to imagine the almost all-out intensity of a shorter run continued indefinitely.  In fact, an ultra marathoner needs to slow down a bit, taking half step back mentally and physically, so that he or she can sustain longer, learning to consume the fluids and foods necessary to keep moving forward.

Here’s my view regarding how to successfully complete a multi-hour endurance event.  I’ve applied this to running and cycling.  This is by no means the definitive guide, just my approach.  There are many guides on the Internet and in books.  I may add some more in the future.

If you become keto-adapted some of this gets easier, although some of us have found that we drink more water than when we were carb-adapted.  I had enough bottle cages (3) on my bike to get from my house to the first water about 22 miles up Mt. Lemmon Highway– now I need a fourth, for which there’s no room on my bike frame.  Most of what I say above still applies, but you are likely to use a little or no sugar (gels, energy drinks, etc.) in your training and racing.  I had several packages of Clif Blox in our pantry that dried out and became inedible after I became keto-adapted and stopped using them.  Instead in runs and rides, I’ve tried carrying Atkins bars, nuts, sausage slices and Babybel cheeses.  Consuming those has become more optional, since there’s no longer a need to keep my blood sugar up.  I’m too old and slow for the long runs, but it appears even the keto-adapted find a certain amount of sugar is helpful in 100 mile events, sort of a super charging effect.