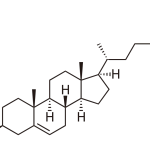 What is cholesterol and why are people told to lower it?  Cholesterol is a lipid (fat) molecule that’s a fundamental component of the membranes of the cells of your body and brain.  You need a lot of it.  The poor science enshrined in the “good cholesterol/bad cholesterol” dichotomy is a perverse interpretation of one of your body’s basic transport systems.

Like all animals, you have a circulatory system that transports all sorts of compounds throughout your tissues.  Your blood is water with things floating in it.  Some of those things, like salt, minerals, sugar, and ketones dissolve and are easily transported.  Fats don’t dissolve in water.  They need a transport system.  That transport system is the “lipoproteins,” balls of proteins and fat that can be moved through your bloodstream.

Here’s a lipoprotein schematic from Wikipedia– 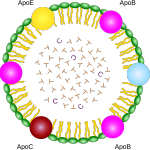 The little Ts in the ball are triglycerides (other fats), the little Cs are cholesterol.  When scientists originally studied lipoproteins, they characterized them by size and density.  The “Low Density Lipoproteins” (LDL) are created by the liver to move fat out to the tissues.  The “High Density Lipoproteins” (HDL) are used to transport non-estified cholesterol back to the liver from the tissues for processing.

When researchers first started measuring lipoproteins, they didn’t have the technology to measure much more than the two different types.  Unfortunately, they labelled this system by the name of one of the things it transports–cholesterol.  Some researchers like Ancel Keys, who already had an anti-fat bias, noticed an apparent correlation between higher levels of LDL and heart disease, in particular atherosclerosis.  That’s due to the buildup of fatty plaques on the walls of arteries feeding the heart muscle, which can block them, causing a heart attack.  They didn’t really understand what they were measuring, but that was good enough to let them advocate their low-fat bias.

In recent years, researchers like Dr. Ronald Krauss have studied what components of LDL actually contribute to plaque formation.  Krauss has shown that LDL comes in a range of particle sizes.  If your diet is high in fat, the particle size shifts toward the “Large Buoyant” LDL, which float along nicely in your bloodstream.  If you eat a high sugar diet, there are more of the “Small Dense” LDL.  Those can lodge in arterial walls at points of inflammation and contribute to plaque formation.  Standard cholesterol tests don’t differentiate LDL particle size.  On the low carb, high fat that I favor, your total cholesterol and LDL levels may actually increase, but the proportion of LDL that is Small Dense LDL will plummet.

Jeff Volek did a lecture on heart disease and low carbohydrate diets in March of 2014 that explains this fairly well, although the visuals aren’t great.  Note, too, he talks about other markers of inflammation as better predictors of heart disease risk.  That led me to one of his articles on inflammation.