Home Nature Wants Us to be Fat

Nature Wants Us to be Fat 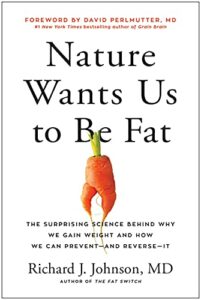 Dr. Rick Johnson’s The Fat Switch, which I read in 2013, was a remarkable discussion of the mechanism by which excessive sugar consumption could cause weight and health problems that are common in our society.  No one else had proposed that mechanism.  Rick also introduced comparisons between humans and other vertebrates I had never seen any other human nutrition writer or researcher address.  I’ve been following the publications of Rick and his small army of collaborators ever since, as well as corresponding with him.  His latest book, Nature Wants Us to Be Fat, adds 9 years of research and additional careful thought.  It is the most important book on the underlying causes of the obesity and diet-induced pathology epidemic I’m aware of.  It is very readable and engaging, explaining the complexities of the journal articles in clear language, tying them into a complete narrative.  Rick is very generous in acknowledging the work of his collaborators and associates.  He uses the model crafted in the first part of the book to explain the role of sugar in an array of non-communicable diseases and behavior issues.  In the last section, Rick compares and contrasts diets that lower sugar intake, plus introducing his own Switch Diet.  He advocates regular aerobic exercise to promote mitochondrial growth.  He concludes that a good starting place to at least partially reverse years of developing problems caused by high sugar consumption is a low carbohydrate diet which induces ketosis, although he questions the long term sustainability of that type of diet.  While there are some minor points I don’t agree with, all his major concepts and recommendations make sense and should be considered carefully by anyone who cares about their health.

The first section, Why Nature Wants Us to Be Fat, is an overview of the decades of research by Rick and his collaborators.  He explains why and how he got interested in understanding what drives fat deposition in an array of animals.  That driver is primarily the sugar fructose, found in fruits, berries, and table sugar (sucrose).  In recent years, high fructose corn syrup has been added to that list.  In addition, our bodies can turn the sugar glucose into fructose when we consume large quantities of food or drink containing easily digestible glucose.  The pathway that breaks down fructose causes Adenosine Triphosphate (ATP), the energy carrier inside all cells, to be broken down to Adenosine Diphosphate (ADP), then Adenosine Mono Phosphate (AMP), and finally uric acid.  That interferes with cellular energy levels.  The uric acid is inflammatory and causes oxidative stress for the mitochondria, where these reactions occur.  While the most important location of this pathway is the liver, other tissues can do this with similar issues.  The uric acid also travels throughout the body, causing stress.  Certain amino acids found in umami foods cause the same reactions.  Beer is like umami foods because of higher yeast levels.  Too much alcohol is a problem as well.  Interestingly, excessive salt intake can drive the pathway, which I didn’t know.  Primates have lost the ability to make vitamin C, which can promote the pathway if we don’t consume enough in our diet.  Our specific lineage of primate has a mutation that makes our uricase enzyme ineffective, preventing uric acid breakdown and further exacerbating the problem.  Rick explains all this in a very readable, comprehensible way that doesn’t require any special science training to follow.  I have that training, but still managed to learn a few things, like the salt issue, that I hadn’t picked up from the journal articles.

A key idea that integrates all these metabolic drivers is that the pathway, which Rick labels the Survival Switch, is a normal mechanism that occurs in all animals.  It’s how fat is quickly added when food and conditions drive the need.  It causes physical changes and behaviors that help animals deposit the fat for times of need, and helps starving animals find food.  In modern society, medicine has grouped the most apparent of those physical changes under the label “metabolic syndrome.”  That includes insulin resistance, fat deposition on and around the liver, weight gain to the point of obesity, elevated blood pressure, and deposition of plaques on arterial walls.  Those can proceed into type II diabetes, heart disease, stroke, and kidney failure.  In Section 2 of the book, Rick explains how the Survival Switch causes those conditions and pathologies, plus several others.  He also presents an interesting model for the genesis of Alzheimer’s disease.  High fructose diets actually cause the brain cells to generate endogenous fructose, stressing the mitochondria and host cells in the brain, leading to cell death.  I’ve read the corresponding journal article, and Rick does an excellent job of explaining the key ideas in clear nontechnical language.  He moves on to explain how the Survival Switch can cause other pathologies and behavior problems.  I haven’t seen any other writer delineate the behavioral aspect so concisely.

The final section of the book is Dr. Johnson’s practical advice for diet and health.  He compares several diets he thinks provide benefit, after discounting high carbohydrate diets, which trigger the Survival Switch to greater or lesser degree.  Most notably, he discusses the Mediterranean diet, the Paleo diet, the low carbohydrate high fat ketogenic diet, and introduces his own Switch Diet.  He concludes the book by recommending that most people will get the best results by starting with a ketogenic diet, then perhaps transitioning to his Switch Diet because of concerns about long term sustainability and effects of low carb/high fat (keto) diets.  I found the Switch Diet quite reasonable.  While I agree with his general recommendations, there are a few details that I question.  I’ve been on a low carb ketogenic diet for 9 years, with no problems sustaining it.  Here’s an account of my experience– https://ross-zimmerman.medium.com/keto-the-first-seven-years-c0fed1799f10?sk=53676a3c2e4da237e0d6d994849845a6. Countless other people have had similar experiences.  However, in the Diet of Hope program (https://dietofhope.org) which provides a medically supervised introduction to low carbohydrate high fat nutrition, success rate measured as maintenance of weight loss after one year was 72%.  The 28% who weren’t successful were patients who could not maintain the diet, despite having actively chosen to join the program.  His recommendations to restrict consumption of red meat and saturated fat don’t match recommendations of other researchers who have put the same amount of work and thought into those areas that he has put into understanding the Survival Switch and its implications.  He doesn’t articulate that the switch to ketosis seems to be just as striking a metabolic transition at the Survival Switch, with ketones functioning as a signaling molecule as well as a fuel, just like uric acid has signaling effects.  After reading this section, a good counterpoint that covers these points of difference can be found in this video of a talk by Jeff Volek and Dr. Stephen Phinney in 2018, arguably RIck’s counterparts as leaders in the world of ketosis research– https://www.virtahealth.com/blog/stephen-phinney-jeff-volek-science-ketosis-adaptation.  You’ll notice in the Praise preamble to this book, that Jeff Volek strongly recommends it.

The References section of the book is extensive.  Rick arranged them by chapter and topic therein, which is very helpful.  I encourage people to read some of the journal articles listed if they would like more detail on the ideas presented.

There are several places where Rick recommends consulting with a physician.  Physicians are not trained in nutrition.  In my experience, they tend to make conventional wisdom recommendations to restrict calories and increase physical activity.  They certainly don’t know the biology presented in this book.  Sometimes they are quite negative when told a patient is attempting a low carb high fat ketogenic diet.  Consider the outlook of your physician and proceed accordingly.  Encourage them to read this book.  That said, one area where it’s important to work with a physician is if he or she has prescribed insulin, metformin, or something similar for Type II diabetes, or medication for high blood pressure. Dr. Dietmar Gann, creator of the Diet of Hope, commented to me that a cornerstone of their low carbohydrate diet program is working with referring physicians to quickly bring down insulin medications so as not to cause an insulin coma as diabetic patients adapt to the diet.  Likewise with management of other medications patients are taking for other aspects of metabolic syndrome.

RIchard Johnson and his collaborators’ work on fructose metabolism, showing its causative role in serious illness and weight gain, is ground breaking.  It replaces (to me) vague claims that glucose consumption driving insulin production is somehow that mechanism with a clear, testable model.  There are other books and information sources that are important for the complete picture of diet and health, but this one should be foundational reading for everyone.